Because they started as an acapella group, their harmonies ring out throughout the show. Recently, they had the honor of performing an acapella rendition of  "Old Man River" for Quincy Jones' 85th birthday. 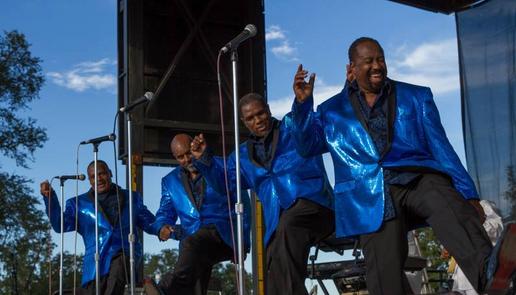 Traveling the world, bringing joy through music, is their passion. In the intervening years, they have shared stages with some of the best in the business including such legends as The Temptations, the O’Jays, James Brown, Ron Banks, and Al Green, to name a few. Just as they were back in the day, you can still see them high stepping in those flashy outfit across stages today.

Over the years, various members have transitioned the signature harmonic sounds until the Mystical quartet was once again complete when Freddie Johnson Jr signed on as a permanent New Orleans Mystic in 2013.

Today, The New Orleans Mystics are still  dedicated to that same rigorous approach to preparing one of  the best Motown Rhythm and Blues Shows on stage anywhere. Each show is produced with high energy to get the people on their feet. They believe, when the curtain goes up, and the spot light come on, Its show time!

Like most soulful rhythm and blues or Motown artists, The New Orleans Mystics had humble beginnings. The group was formed in 1972 with their heart set on stardom. Every day after school, it was rehearsal time.  That magical formula always started with the right song selection, a strong vocal delivery, and finally -- exceptional harmony. For the New Orleans Mystics, it didn’t end there. They would create their own choreography and hired a seamstress to tailor outfits with that Mystic touch.

After decades of harnessing their passion for perfection as an acapella group, they continue to deliver impeccable harmonies for each and every show. Two of the original members, Billy Mims and Lee Barnes, and later joined by Michael Baptiste in 1975, still currently share stages around the world. Tragically, Anthony Mims, died after suffering an aneurysm in 2001.

Recently, The New Orleans Mystics teamed up with veteran Manager-Agent, Selwyn Miller. Miller has managed numerous artists including Bread, Little Anthony and The Imperials, and Petula Clark, to name a few. He has also booked and promoted events for such artist as Keith Sweat, Deborah Cox, Montell Jordan, Brian McKnight, Mary J. Blige, The Temptations and many others of that stature.

Together we are ready to keep the true authentic experience of live Motown, R&B, Soul and Jazz on a stage near you..